LGMD: A Group of Neuromuscular Diseases with Many Subtypes 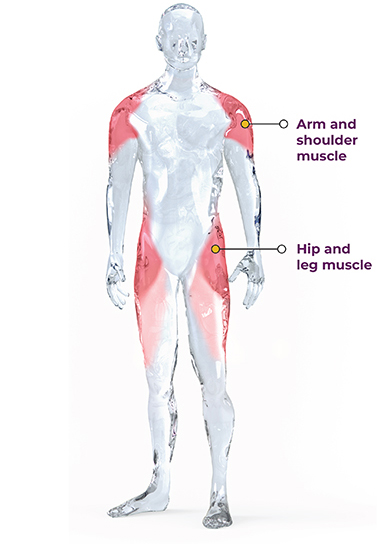 Limb-girdle muscular dystrophy (LGMD) is a group of distinct diseases that cause weakness and wasting of the muscles, generally starting with the muscles around the hips and shoulders and eventually progressing to the arms and legs. However, some subtypes start distally at the leg or arm muscles and then progress to the hip and shoulder muscles. LGMD can be caused by a single gene defect that affects specific proteins within the muscle cell, including those responsible for keeping the muscle membrane intact.

Symptoms may appear at any age, depending on the type of LGMD, and in some subtypes tend to progress faster in younger patients. Individuals may have trouble getting out of chairs or climbing stairs. Eventually, they may need a wheelchair to get around. Some forms of the disease lead to heart and breathing problems and early death.

Taking into account the various subtypes, limb-girdle muscular dystrophy has a global prevalence of approximately 1.63 per 100,000 individuals worldwide. Over 30 subtypes exist, and both genders are affected equally.

Given the complexity of the various types of the LGMDs, genetic testing plays a critical role in diagnosing which subtype you may have. In some cases, additional specialized genetic testing may be necessary to identify your subtype. A doctor can identify the appropriate test and help patients understand the results.

See where and how to test

The Science Behind Gene Therapies in Development for LGMD

Sarepta’s gene therapy program in development uses distinct but similar technology for 6 of the most common subtypes of LGMD, types 2A, 2E, 2D, 2B, 2C, and 2L, representing over 70% of all known LGMDs. Each investigational candidate in development targets a specific genetic defect that plays a critical role in muscle cell structure and function.

The goal of gene therapy is to deliver to the affected muscles a functional copy of the defective gene that is specific to the subtype of LGMD.

Learn more about our LGMD gene therapies in development

An Introduction to Limb-girdle Muscular Dystrophies and Gene Therapy

Louise Rodino-Klapac, Ph.D, Executive Vice President, Head of R&D and Chief Scientific Officer, is renowned for her work in molecular genetics and gene therapy. Her pioneering research is the foundation for five of our investigational limb-girdle muscular dystrophy (LGMD) programs. Hear from Dr. Rodino-Klapac about LGMD, the importance of knowing your subtype and the basics of gene therapy.

There are more than 30 forms of limb-girdle muscular dystrophies. Sarepta is targeting 6 of some of the most prevalent and severe LGMD subtypes: 2A, 2B, 2C, 2D, 2E and 2L.

The groups below represent a few of the organizations that help connect patients and families to education, research, support services, and the broader limb-girdle muscular dystrophy community.