Every gene therapy is comprised of a vector, a promoter, and a transgene, and identifying the appropriate components is critical to developing viable gene therapies. Each component has a role to play: 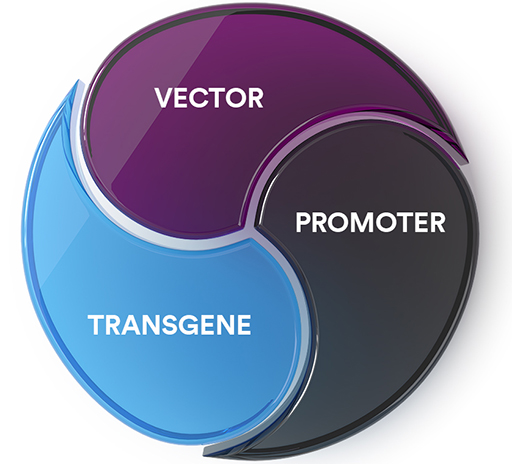 Vector: Responsible for tissue targeting and delivering the transgene and the promoter to target cells. There are several different types of vectors, including viral vectors such as adenovirus, adeno-associated virus, retrovirus or lentivirus. Other non-viral vectors used in gene therapy include bacterial, lipid- and polymer-based vectors. Patients can potentially have antibodies to some vectors and immune response is important in selecting a vector. Sarepta is currently using adeno-associated virus (AAV) vectors for our gene therapy platform.

Transgene: Responsible for producing a functioning version of the protein of interest. The transgene is genetic material introduced into targeted tissues by the vector, and its expression is driven by the promoter. 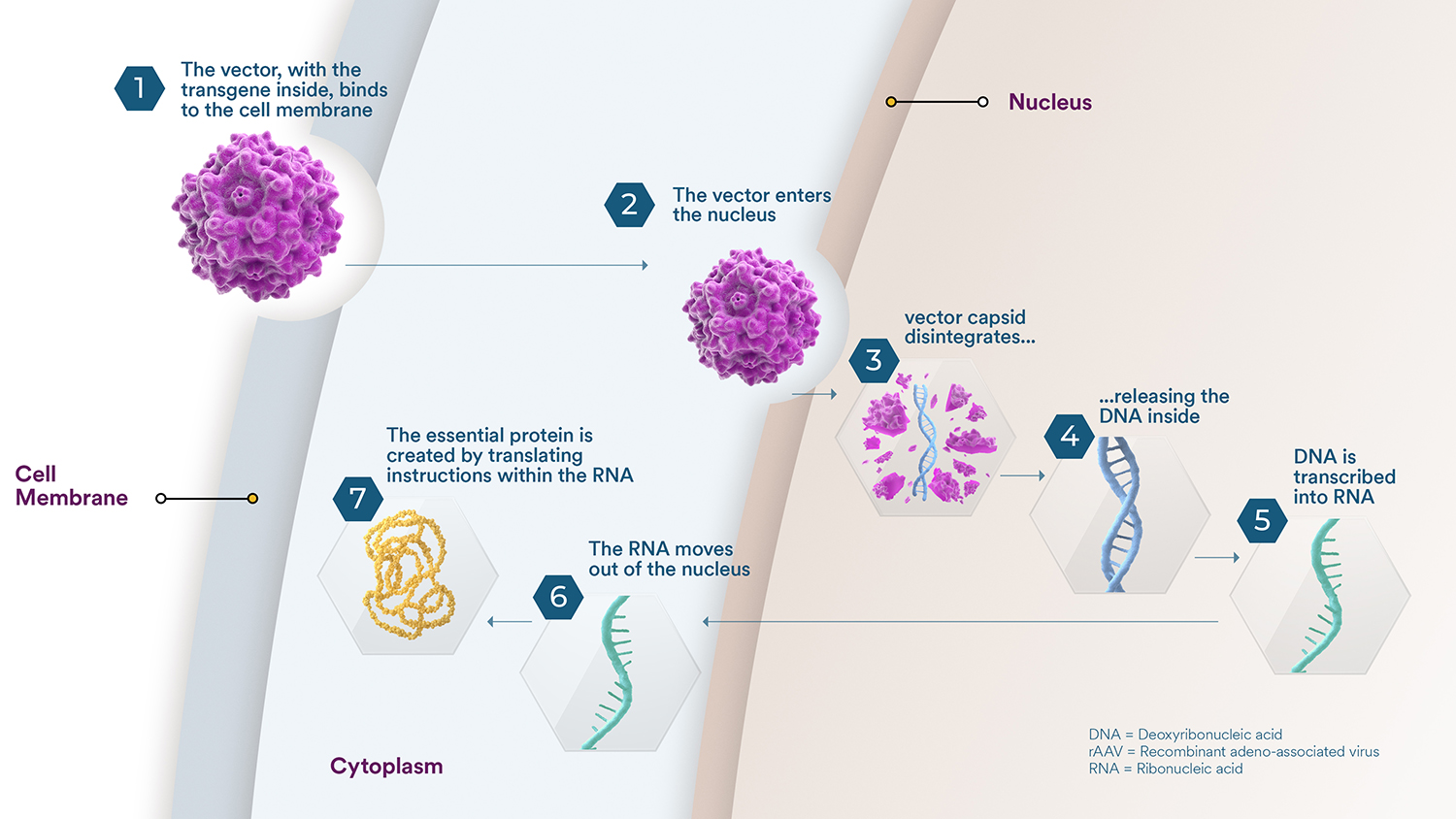 Sarepta’s gene therapy engine is tailored to specific disease states and aims to select individual components that target specific tissues and cells with the goal of optimizing expression of the select protein in those tissues. Together, these three components form what is called a construct.

Sarepta Therapeutics has brought together the elements essential for successful development of gene therapy—productive collaborations, unparalleled scientific understanding, and an unwavering sense of purpose.

We’re proud to be working with distinguished pioneers at The Center for Gene Therapy in The Research Institute at Nationwide Children’s Hospital, striving to transform gene therapy’s promise into clinically-proven reality.

Nationwide Children’s is internationally recognized as having been at the forefront of genetic therapy research for over 30 years. We are collaborating with Nationwide Children’s on the advancement of our micro-dystrophin gene therapy program under a research and exclusive license option agreement. 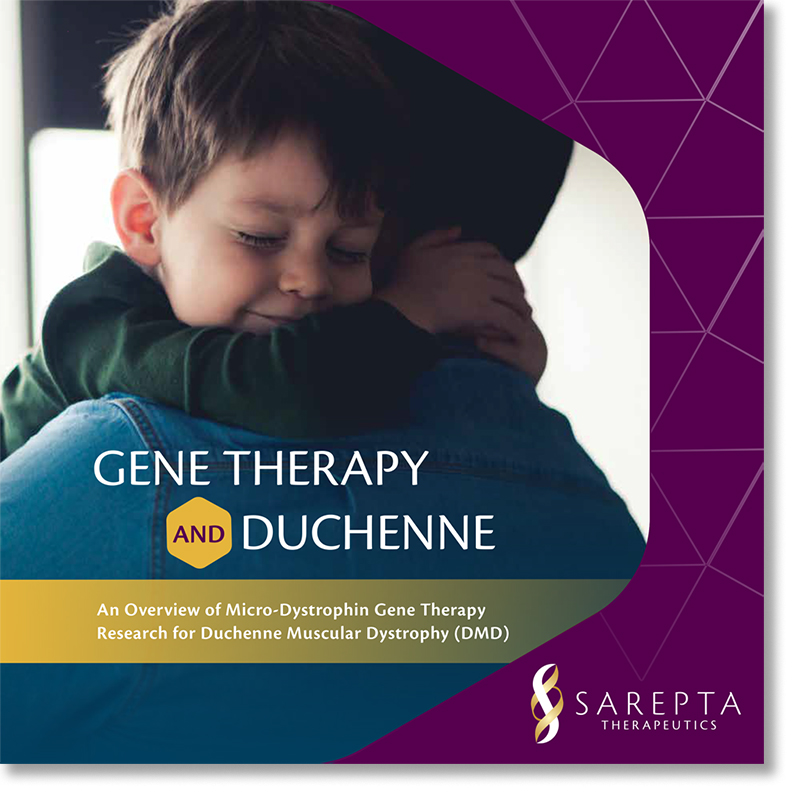 Sarepta Therapeutics is leveraging our platform approach in gene therapy to research a potential treatment for Duchenne. The information in
this guide provides an overview and answers some frequently asked questions about micro-dystrophin gene therapy.

The programs for LGMD subtypes 2A, 2E, 2D, 2C, 2B, 2L are being advanced under the guidance of Louise Rodino-Klapac, PhD, Sarepta’s Executive Vice President and Chief Scientific Officer.

You may see variants of LGMD subtype names, as there are several systems in use. Historically, the numerals “1” and “2” have been used to designate the inheritance pattern, followed by a letter indicating the subtypes’ order of discovery. More recently, an alternate system uses the letter “D” for some type-1 dominant inheritance variants, and the letter “R” for some type-2 recessive inheritance variants, plus a number for the order of discovery.

The subtypes are also sometimes referred to by the gene or protein abnormality involved; for example, LGMD2E is also called beta-sarcoglycanopathy because it results from a mutation of the beta-sarcoglycan gene (“-opathy” means a disease or disorder).

The sarcoglycan complex is a subcomplex within the dystrophin-associated glycoprotein complex, consisting of 4 different glycoproteins (gamma, alpha, beta, delta sarcoglycan), which help to maintain sarcolemmal integrity. Mutations in genes encoding one of these four proteins cause LGMD 2C, LGMD 2D, LGMD 2E, and LGMD 2F, respectively.

Phenotypically, sarcoglycanopathy resembles dystrophinopathy, with severe, progressive proximal muscular weakness that leads to early disability. Symptoms may present in early life—typically 4 to 7 years old—and presentation may occur up to the second decade. Respiratory failure and cardiomyopathy (rare in LGMD 2D) are common features and should be actively screened for.

The elements of our investigational gene therapies for the sarcoglycanopathies are as follows: 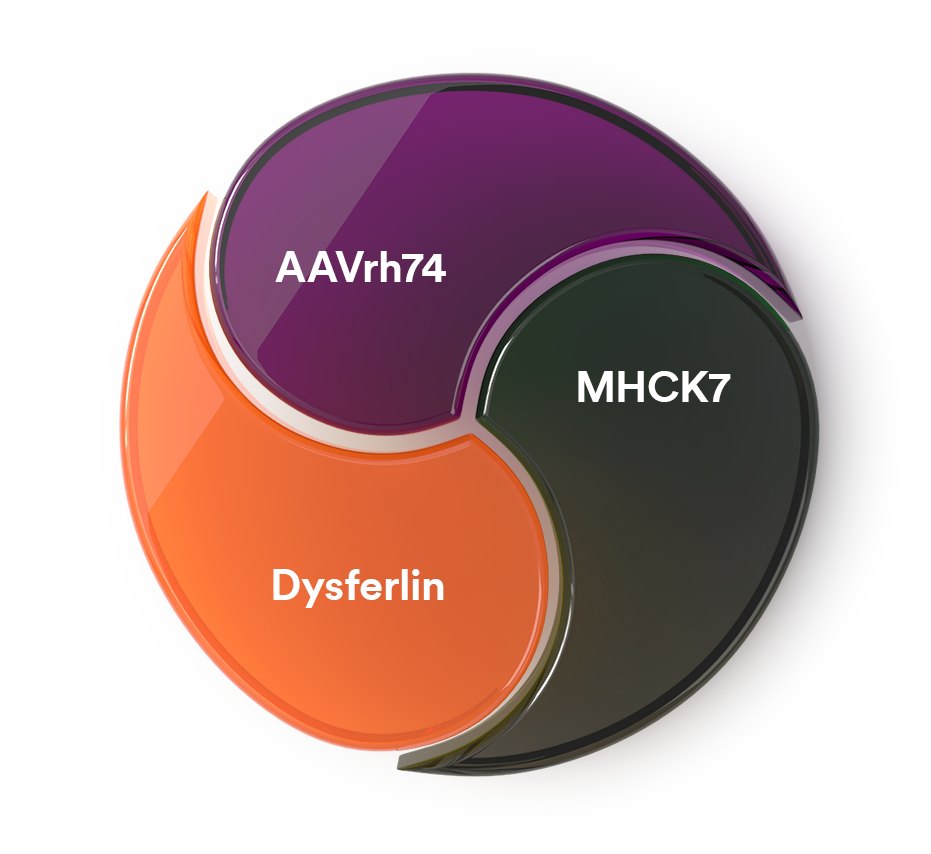 LGMD 2B (Dysferlinopathy) is a rare, recessively inherited muscular dystrophy caused by mutations in the DYSF gene. The DYSF gene may play an important role in membrane repair.

The elements of our investigational gene therapy for LGMD 2B dysferlinopathy (LGMD R2) are: 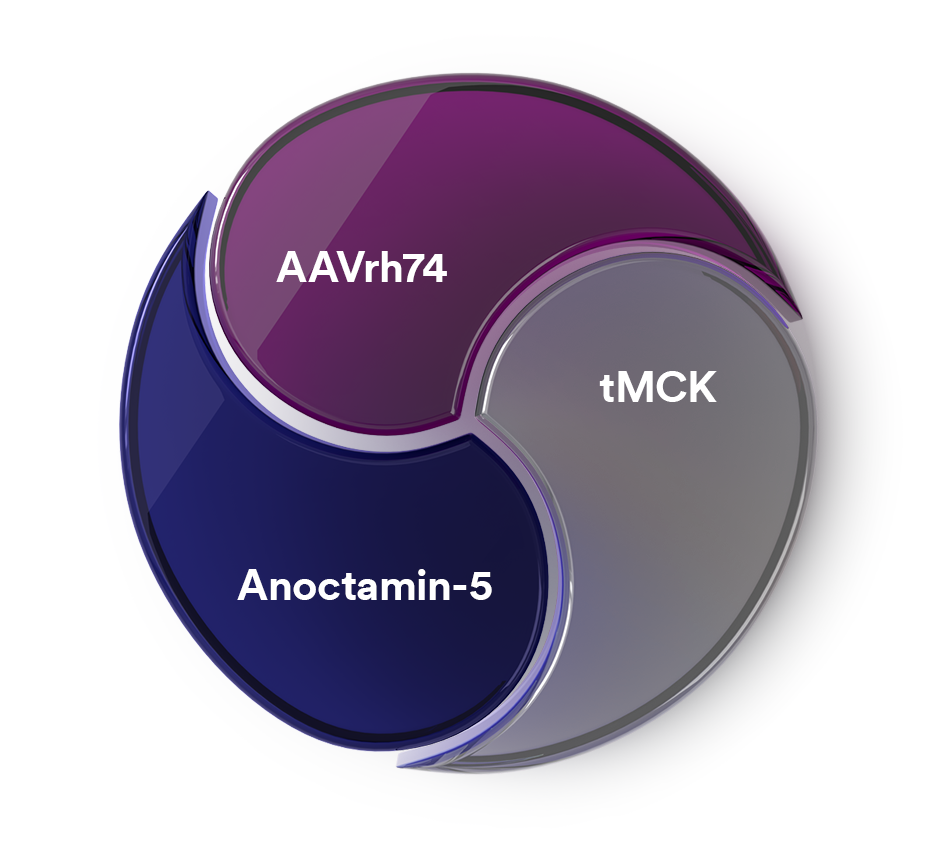 An autosomal recessive mutation in the gene coding for anoctamin 5 causes limb-girdle muscular dystrophy type 2L (LGMD R12). Anoctamin 5 has been shown to be critical for membrane repair, but how it functions in the membrane repair complex remains unknown.

This condition is characterized by proximal weakness affecting the pelvic girdle and leg muscles, or with only distal weakness known as non-dysferlin Miyoshi muscular weakness type 3 (MMD3). Asymmetric weakness is relatively common in which prominent asymmetrical atrophy of the quadriceps femoris and biceps brachii is the diagnostic hallmark.

The elements of our investigational gene therapy for LGMD 2L anoctaminopathy are: 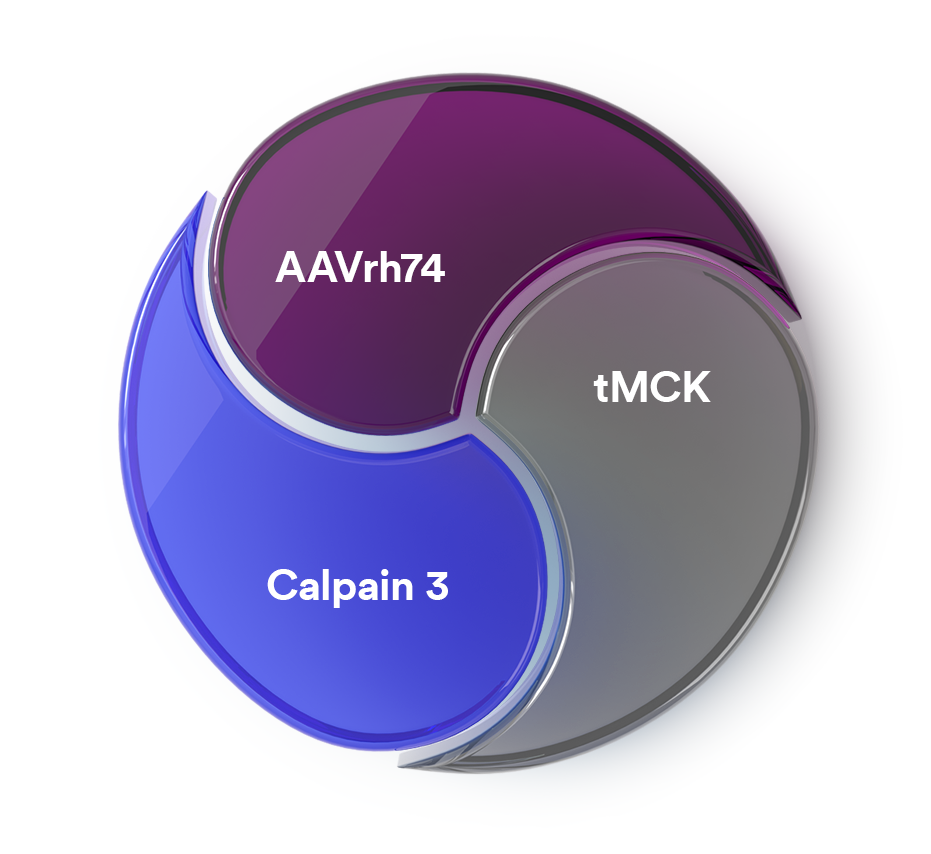 CAPN3 gene encodes a muscle-specific, calcium-activated neutral protease, calpain-3, that binds to titin and dysferlin and plays a major role in sarcomere remodeling.

Calpainopathy is characterized by symmetric and progressive weakness of proximal limb-girdle muscles. The age at onset of muscle weakness ranges from two to 40 years. Clinical findings of calpainopathy include the tendency to walk on tiptoes, difficulty in running, scapular winging, waddling gait, and slight hyperlordosis. Loss of ambulation typically occurs from 5 to 39 years of age.

The elements of the investigational gene therapy for LGMD 2A calpainopathy are:

Exploring the Potential of Gene Therapies for Limb-girdle Muscular Dystrophies

The pioneering research of Louise Rodino-Klapac, Ph.D, our Senior Vice President, Gene Therapy is the foundation for five of our investigational limb-girdle muscular dystrophy (LGMD) programs. Hear from Dr. Rodino-Klapac about the science behind the LGMDs, the importance of subtype identification and how our gene therapy engine will help engineer potential therapies for this group of inherited neuromuscular diseases.

The goal of this program is to replace the faulty SGSH gene with a functional copy of the gene. Lysogene and Sarepta signed a license agreement for LYS-SAF302.

The three elements of the investigational gene therapy (LYS-SAF302) for MPS IIIA are:

Sarepta, along with our collaborator, Zarife Sahenk, MD, PhD, from Nationwide Children’s Hospital, is developing neurotrophin 3 (NT-3), a gene therapy candidate designed to treat CMT, with the lead indication being type 1A.

Schwann cells (SCs) play a crucial role in the support of axonal regeneration and associated myelination. Our hypothesis is that mutations interfere with the ability of SCs to differentiate into a competent state to support axonal growth and myelination. Schwann cell survival and differentiation factor, NT-3, could potentially overcome these deficiencies.

This investigational compound is designed to deliver a neurotrophin NTF3 transgene. 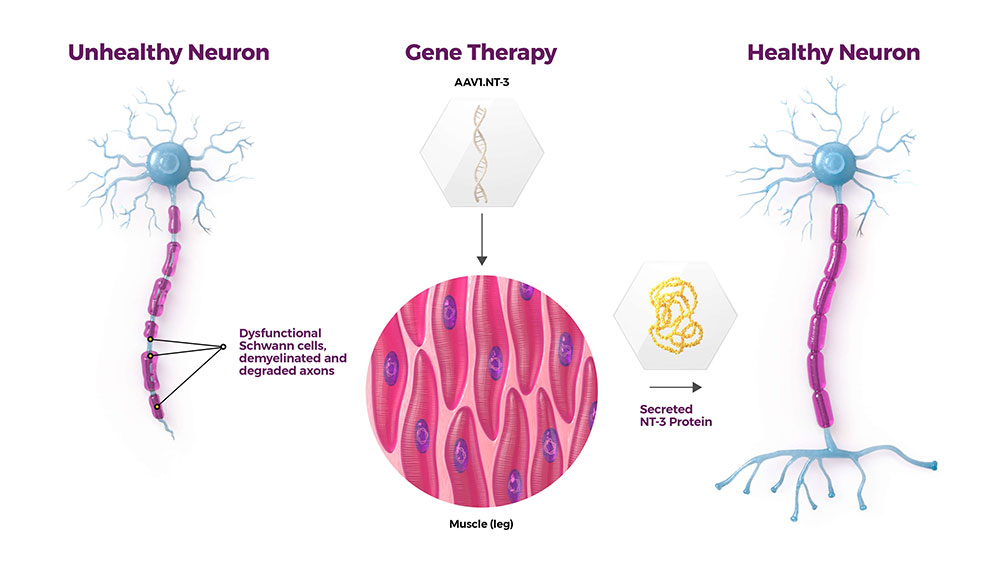 The three elements of Sarepta's investigational gene therapy for CMT are:

NT-3 gene therapy in development also has the potential to treat other subtypes of CMT, along with other muscle-wasting disorders.