An only-child born to Brazilian immigrants in Pennsylvania, Julianna spent her childhood and early teens in constant motion, playing basketball, volleyball, ballet and marching band while attending Catholic school in her hometown. It wasn’t until, at the age of sixteen, when Julianna broke her foot during marching band, that she began the long journey to an LGMD diagnosis.

Symptom-free until 16, the podiatrist Julianna consulted for her broken foot noticed that she walked on her tiptoes and referred her to physical therapy to help stretch her hamstrings and Achilles tendon.

“I started physical therapy, but that didn't really help with anything,” Julianna recalls. “I was still pretty tight, but I never thought anything of it because it never bothered me and never really got in the way of anything I was doing.”

After her course of physical therapy ended, Julianna returned to the podiatrist who, noticing things still were not quite right, recommended Achilles tendon-lengthening surgery for each leg. Julianna went ahead with the procedures but when she resumed physical therapy, her symptoms had worsened, and she found herself too weak to even use crutches.

“At the time, I couldn't figure out why, because everyone uses crutches. You learn and then you just get used to it. But I couldn't do it,” Julianna says. “They kept asking me, ‘What's wrong with you? Why aren't you trying hard enough? You're not exercising enough. You're being lazy.’” Julianna recalls that, those who weren’t labelling her as ‘lazy’ were telling her that she simply needed to be patient and give her body more time to heal.

After months of being told to work harder, a series of physical therapy consultations followed. Finally, during the fourth evaluation the therapist had some new advice. “He didn't even finish my evaluation. He sat down with me and said, ‘Look, I'm not going to schedule any appointments for you, because there's something else going on. You need to see a neurologist because this isn't normal.”

Julianna sought out her own neurology appointments and initially received similar advice:  Be patient. It takes time to heal from major surgery. While the list of specialists with no answers grew, Julianna’s health continued to get worse. She felt weak all the time, had trouble moving from a seated position and could no longer walk upstairs without leaning on the railing. Finally, a neurologist referred Julianna to a Muscular Dystrophy Association (MDA) clinic called the Good Shepherd Rehabilitation Hospital in nearby Allentown.

There, Julianna again underwent multiple tests, including an inconclusive muscle biopsy. It was only after more tests and a referral to another neurologist that, after almost five years from the date of her first foot surgery, Julianna was diagnosed with limb-girdle muscular dystrophy (LGMD), type 2B.

“It was a very long journey,” recalls Julianna. “I started having symptoms when I was 16. I wasn't officially diagnosed with limb-girdle muscular dystrophy type 2B until I was about 21 or 22. Since I had symptoms for so long, being diagnosed was almost a relief, honestly. It was like, ‘Oh okay, now I can put a name to everything that's been going on with my body.’”

Connecting to a community

Immediately after her diagnosis, Julianna’s neurologist connected her with resources in the LGMD community including the Jain Foundation, a patient advocacy organization dedicated to helping patients and families affected by LGMD, specifically type 2B. Julianna also discovered The Speak Foundation, an organization for all the LGMD subtypes, and attended their 2019 National LGMD Conference in Chicago.

It was there that Julianna connected with many members of the LGMD community and committed to sharing her story with the hope that it could help others feel less alone, navigate decisions and help them understand the importance of genetic testing.

Life then and now 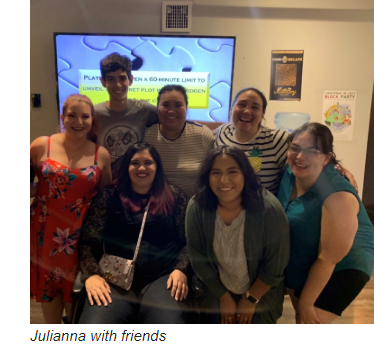 During the years when Julianna was seeing more physical therapists than she could count, she finished high school and attended college, majoring in political science.

“I graduated, but it was hard. College itself is exhausting, and when you throw in a neuromuscular disease along with it, I was tired all the time. Getting around campus wasn't easy, either. Not to mention the whole getting up, sitting down, moving to the next classroom, sitting, getting up. Everything was difficult; everything was hard,” she says.

Today, Julianna’s symptoms require full-time care. Living with her mother who is her full-time caregiver, she uses a wheelchair and stair glide and her house has been significantly modified to accommodate her needs.

Despite the challenges she has faced, Julianna remains hopeful and optimistic. She explained, “It's frustrating wanting to do something and to know that you have to depend on someone else to get it done. I think the best advice that I could give would be to just be as patient as possible. It's okay to need help. You can still get everything done; you just need to be a little bit more patient.”

Today, Julianna is enrolled in an online master’s degree program with a focus on rehabilitation counseling. She hopes that this degree paired with her personal experience will make her well-suited to one day work at the Office of Vocational Rehabilitation or a similar organization to help others navigate through the many challenges she has faced.

“I want to help people. This journey has allowed me to understand and empathize with what other people like me are facing. I now know what I should have done when I was younger and I want to be able to guide other people who are going through the same thing,” Julianna says.

Sarepta is committed to learning more about the journey to diagnosis for patients like Julianna and is working to make that process easier through accessible and affordable genetic testing, LGMD education and awareness for physicians, and advocacy and outreach to the patient community.

Given the complexity of the various LGMD subtypes, genetic testing plays a critical role in pinpointing a diagnosis. In some cases, additional specialized genetic testing may be necessary. A doctor can identify the appropriate test and help patients understand the results.