What’s in a name? A lot, for the limb-girdle muscular dystrophy community.

There’s a lot at stake in how we refer to limb-girdle muscular dystrophy, especially for patients, caregivers and medical professionals managing this complex group of diseases.

A quick primer on LGMD

Limb-girdle muscular dystrophy (LGMD) identifies a group of diseases in males and females that cause progressive weakening and wasting of the muscles that “girdle” the shoulders, hips, upper arms and legs.1 There are more than 30 distinct subtypes of LGMD, each with a unique genetic mutation and its own distinct symptoms, progression, and treatment approaches. The mutations involve the coding for specific proteins that control muscle function, regulation and repair.2

As we learn more about LGMDs and researchers discover new variations, the number of subtypes will increase, adding to the complexity of in terms of symptoms, potential treatments and clinical trials. It’s a new challenge to address in this fast-paced era of genetic medicine, and the nomenclature being used matters.

Out with the old and in with the new?

The term “limb-girdle muscular dystrophy” was introduced in 1954 to describe a heterogeneous group of disorders. By the 1990s, advances in molecular genetics allowed for more specific characterization of a number of LGMD variants, prompting an international consortium to classify the condition by subtype in 1995. However, further scientific developments and the number of subtypes have made that format impractical, so a new classification system was developed. 3

The most recent discovery is classified as LGMD2Z, meaning the next would draw the name LGMD2AA. In addition to being a confusing “alphabet soup,” this format is not in conformance with current scientific standards.3

New scientific discoveries are making an already complex disease even more complex, prompting a diverse group of stakeholders to convene and fix it. Their new nomenclature convention, detailed in a paper in the journal Neuromuscular Disorders, uses a new formula that includes the subtype classification:

As an example, under the new classification, LGMD Type 2E (LGMD2E) becomes LGMDR4 (β-sarcoglycan). Many physicians are already using the new naming classification, but it hasn’t fully caught on with industry yet, meaning you will continue see the older names in use. 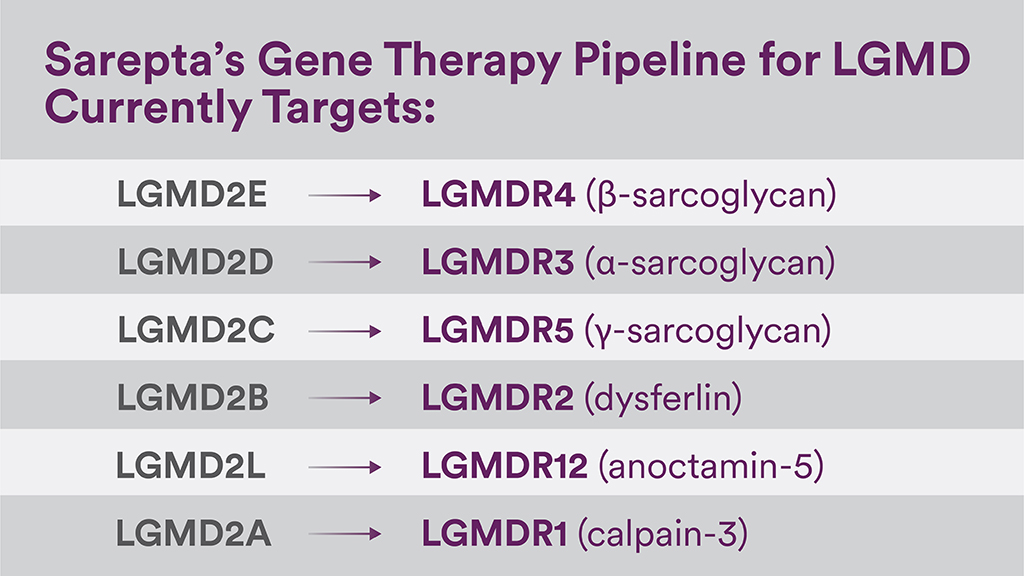 We are in the process of implementing these new classification guidelines for our LGMD gene therapies currently in development and people will see both names used for quite some time,” said Pratik Parikh, director of global medical affairs for LGMD gene therapy at Sarepta Therapeutics. “At Sarepta, it’s important for us to keep our program names updated and have them reflect what the LGMD community is doing to help patients better understand their subtype and manage their diagnosis.”

A new hope with gene therapy

In the new era of gene therapy, a genetic test or genome sequencing can confirm a specific LGMD diagnosis and help identify the specific mutation subtype.4 For patients and the LGMD community at large, confirming a subtype is important because it can inform the development of clinical trials and potential treatments for that specific subtype.

A confirmed subtype is crucial for patients looking for an appropriate clinical trial, which is why diagnosis—which often involves genetic testing—is critical. Each LGMD subtype is a distinct disease, and if there is not a gene therapy in development for a subtype, researchers are still able to use the diagnostic information to better understand how these different diseases progress, design future clinical trials and develop new treatments.